Getting in Touch with the Divine Mother

Hello fellow seekers. I usually write about discoveries I’ve made during my personal journeys. Revelations I think may help someone else. But this time, I’d like to write about something I am still discovering. This is my experience of getting in touch with the Divine Mother.

I think of my blogging like being a rock climber climbing in a group. The one ahead of you and behind you is part of your experience. You are all tied together and helping one another. It is a collective. Hopefully, you will find this post helpful.

I have had many youtube gurus that I am very grateful for. You can say what you will about Google. But for me, I cannot put a price on youtube. It has exposed me to great thinkers and awakened beings. One such person is Swami Sarvapriyananda of the Vedanta Society.

Before I proceed, please know that I am not advocating Vedanta. I am a student of many religions and take what resonates with me from each of them. Case in point is a talk Swami gave about devotion. He said that Sri Vivekananda (the founder of the Vedanta Society), advocated multiple paths to enlightenment rather than just one. In the talk, Swami briefly touched on each path: Knowledge, Deeds, Meditation and Devotion.

So I considered this and realized I was indeed practicing all of these paths, except Devotion. Actually, I have never been devoted to anything spiritual.  I never connected with any of the traditional icons of devotion. In fact, I didn’t really feel it was right. So what to do about that? Should I ignore this advice and carry on as my cynical self? Or should I open this door to Devotion and explore my options?

Thankfully, Swami came to my rescue (again). I found another talk he did on Devotion (Bhakti yoga) and in it he actually said “So what do you do if you don’t feel devoted?” Whew!! His advise is “Just develop a practice and it will come.” And guess what… he was right.

In the beginning, I chose a Hindu goddess, Saraswati, as the focus of my devotion. Why? Because she is the goddess of knowledge and wisdom and creativity. What is not to love about those things? So I ordered a statue and set up an alter (things I never thought I would do …) I also bought a flowering plant so I would have a constant supply of flowers to offer her.

Next, I made a mala so I could say a mantra 108 times. (See below for the mantra I say today. It is a work in progress.)

Then I sat down in front of my statue armed with my beads and bearing offerings of flowers and fruit and incense. And I lit a candle. Check. Did I feel silly. Yes I did. Not a lot but a little.

Anyway, I focused my attention on the goddess that was the deliverer of precious things. And I offered her my prayers of gratitude and desire. Thank you for my blessings and please bestow upon me (and all others) these things. At first, it felt whiny. I have believed my entire life that you work for what you want. Now here I was, asking for things. But that is kind of how the Hindu mantras are. So I changed my mantra to include things that make me a better person. More able to be of service to others. And I added humility to the request. Suddenly my mantra was feeling less like a request and more like a surrender. Hmmm. 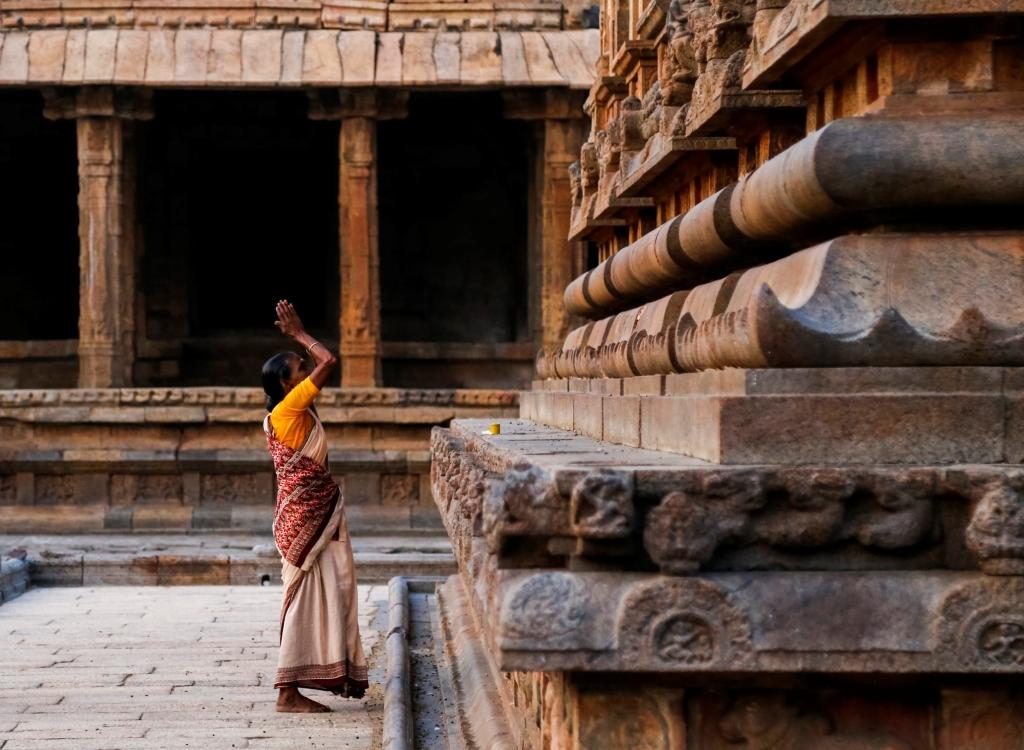 A few other things morphed along the way from then to now. I now am praying to the Divine Mother instead of Saraswati specifically. After all, Saraswati is just one aspect of the Divine Mother. (The Hindus are very fond of dividing up the nature of God into manageable bits.)  I am still doing it in Sanskrit but you might prefer an Aramaic prayer. One day during meditation,  I received a strange interjection of the single word ‘Kali’  which is a very complex Goddess aspect. So I have begun to try and connect with Kali. Maybe I will have a post on her soon. But, for now, I won’t add my rabbit holes to those of your own.

Since starting this practice, I have found that I often meditate on the Divine Mother as well. It is as though someone introduced me to someone really interesting and I can’t get enough. One day, in meditation, I had a calm realization. This is going to sound like, yeah, duh. But thinking something and knowing something are not the same. And that day, I knew – at the core of my beingness – that I am the Divine Mother. She is in me. Just like she is in you. And I felt her there. Quietly loving me from the inside out. How great is that? This is especially wonderful if you, like me, had a less than stellar earthly maternal experience.

Now that I have begun this path of Devotion, I can’t believe I made it this far without it. There has been a definite shift in my presence here. Tears are flowing freely from my eyes as I am typing this and thinking about all the love and support and strength I have ‘found’. But there is much more to this practice that, honestly, cannot be described. And it is right there for the asking. Wow.

If you do not have a practice of Devotion, I hope this encourages you to consider it. And may your journey be cradled in the arms of the Divine Mother,